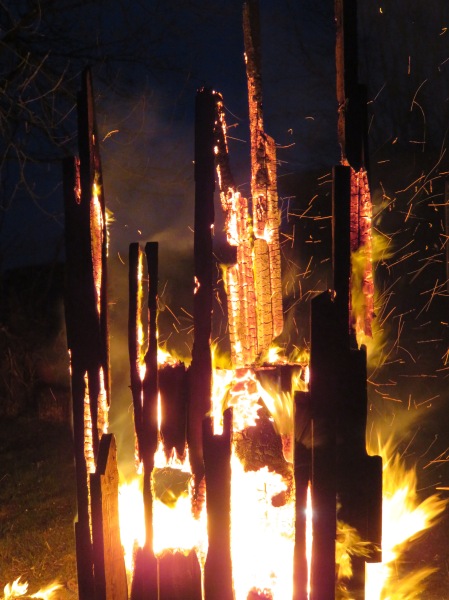 The Fire Sculpture I created for, and fired at, this year’s Vernal Equinox proved to be the most successful sculpture to date. It has now become an annual event for family, friends and my fellow tree or spring guardians.
Using gash timber from our old hay store I created a three sided structure with a raised pinnacle which, as to order, disappeared inside once the fire developed a life of its own and roared away.
Just before everyone arrived a large white goose waddled down the lane and walked into the orchard. All the guests were greeted by a honking goose. The goose stayed for a few days sleeping on one of the raised vegetable beds.
The Vernal Equinox is a time of change so I encouraged my guests to bring an object, charm or totem to place on the sculpture so all the negative energy of the last year could be consumed by the fire. Since the arrival of the New Energy at the last Winter Solstice the trees have told me that we need to drop and ignore all the negative energy that surrounds us.
We need to take a more positive path through a deep reconnection with the natural world.

There have been no blogs for a while as I have been interpreting, checking and re-checking the new knowledge that has been revealed by the trees.

The New Energies that arrived during the last Winter Solstice have transformed the energy within the powerful Beacon Trees.
Over the previous four years at Winter Solstices, along with a combined Lunar Eclipse and Red Moon, the energies of these trees have been increasing. As well as the large energy fields around, above and below them they are surrounded by a vertical vortex of energy.
These spiralling vortexes are 36 heights above and below the ground. A height is measured from the top of the tree’s canopy to the base of its roots. The reasons for these vertical vortexes were revealed to me after strange experiences in Wistman’s Wood on Dartmoor and a shamanic drumming workshop. I was shown that when the New Energy arrived it would start to form a cone of energy just above the top of the vortex. The cone would then enlarge to form a larger spiral of energy at ground level and then an even larger one underground at the base of the vortex.
During the afternoon of the 2016 Winter Solstice the energy arrived in this form. The Beacon Tree that is my guide now has a cone of golden light surrounding it.
This energy is to strengthen the earth below and the creatures upon it. For those of us who have a strong connection to earth energies this will lead to new knowledge and strength. It will help us guide others in the path they need to take to cope with the changes that are on the way.
This New Energy has also arrived before at three other times in our past. Looking through timelines it is clear that the energies that have arrived in Beacon Trees have formed the foundations of our development and above all our thought.
They are the trees of Life and Knowledge!
We must now take advantage of these energies the trees are giving us to work with the earth and re-address its balance.