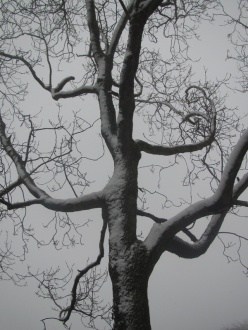 Here on the Blackdown Hills none of the ash trees have seeded. At this time of the year the leaves have been blown away as the Autumn winds gather strength but the keys (seeds) are normally still there until in due course they drift down to the ground. But there are none so I asked the question-Why Not?

Over the last two years I have been asking ash trees about how the ash die-back disease (Chalara) is affecting them. They still continue to make it clear to me that only 12% of ash trees on the British mainland will succumb to the disease. These will be young trees (including all the imported ones) and some old trees which already have a multitude of problems. Over a year ago they informed me that all ash trees will show symptoms of the disease but they will recover in one or two years once their resistance has kicked in.

The answer to the question is that this year the ash trees have put all their energies into themselves in order to cope with the changes that are on the way. This coincides with the second increase in natural energies (see previous post) and it looks likely that the third and final increase will be concentrated on strengthening them. Although they are part the way through this process of re-energising themselves the indications are that they will show no signs of ash die-back disease.